Back to Patient Stories »

When Fiona Wells was offered the option last summer to receive ongoing cancer care treatment on a Hope for Tomorrow Mobile Cancer Care Unit (MCCU), she knew the experience would be “gentler”.

It’s the second time 56-year-old Fiona has chosen to receive treatment on Caron, the East Kent mobile unit based at the Queen Victoria Memorial Hospital in Herne Bay. Fiona, who lives in Whitstable with her two teenage daughters Betsy and Phoebe, was first diagnosed with HER2-positive breast cancer in 2016.

On hearing her first diagnosis Fiona said: “I’m pretty laid back about things and I just thought oh OK which sounds bizarre, but my mum had breast cancer, my sister had breast cancer, so I have had experience before of dealing with it. For me, when I first got it, I just remember finding the lump and thinking OK, it is what it is. I was more upset for my children because, at the time, Betsy was 10 and Phoebe was 13.”

Initially, Fiona travelled to Kent and Canterbury Hospital, managed by the East Kent Hospitals University NHS Foundation, for six sessions of chemotherapy, followed by three weeks of radiotherapy. She then accepted an option to receive further treatment on Caron at Herne Bay. Over the course of a year of visiting the MCCU, Fiona had 17 sessions of Zometa delivered via an injection to her leg.

Later, in 2019, Fiona received a diagnosis of secondary breast cancer in the bones of her hip and spine. Fiona said: “The second time, it was out of the blue because they discovered it through me having a procedure for Crohn’s disease.”

Fiona returned to Kent and Canterbury Hospital to be treated with two different drugs – pertuzumab and trastuzumab. The first 30 treatments were delivered in hospital (during lockdown) via an intravenous drip, with each session lasting four hours. Then, last summer, Fiona was offered an opportunity to return to Caron at Herne Bay to receive a combined treatment called Phesgo. Phesgo is injected into Fiona’s thigh over a period of 7 minutes.

Fiona said: “Now, instead of taking four hours, I’m in and out within half-an-hour. It’s a huge difference. I’m not using up a chair for so long on the unit, so someone else can use it. It frees up a lot more time at home and has enabled me to be a mum more because it’s always before school pick-up time.

Fiona values the convenience of using the MCCU: “For me, it’s the access; it’s so easy. You literally park outside and walk in.”

Fiona is also full of praise for the NHS staff she meets on Caron: “The people that are there are lovely – really, really kind. Any of the people giving me treatment have been gorgeous. The drivers – whether it be Bryan or Barry – are divine. They always make you a cup of tea although I’m not there long enough to have a cup of tea anymore unfortunately! They just make it less clinical. To have that facility where we can choose if we want to use it or not is amazing. It’s just gentler – for something that is so harrowing, this makes it a lot gentler.”

Fiona’s treatment is ongoing, but her next visit to the MCCU in early May 2022 will be a little different – it will be her first treatment on the newly rebuilt Caron.

Fiona said: “It’s just an amazing facility. We’re so lucky to have it. So lucky.” 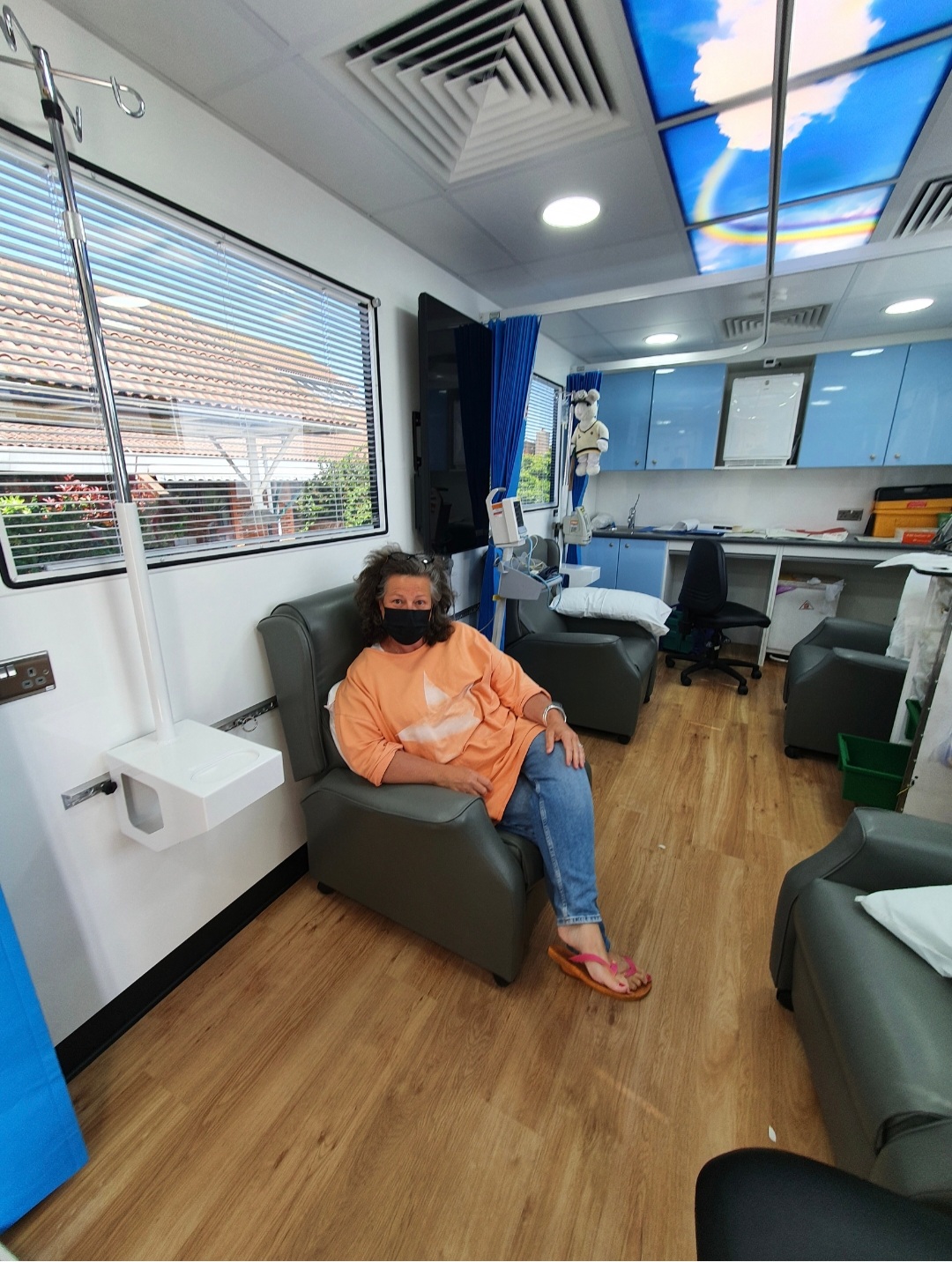