Though Carla Whitbread now lives with her husband and children in Lymington, Hampshire, she was born and raised in Portugal and spent fifteen years in the US. She speaks with an interesting mix of accents which seems special to her.

Her two children, Etienne and Spencer, were four and six years old and Carla was working as a head of faculty at a local secondary school when she was diagnosed with secondary breast cancer, in September 2011. The cancer had already spread to her liver, lungs and bones and she was given only twelve months to live.

“It was really scary,” she says. “I gave up work straight away and started treatment.” Now, five years and eight months later, Carla is close to her one hundredth Herceptin treatment.

Carla was the first patient on an outreach programme run by Southampton General Hospital at the Oakhaven Hospice in Lymington. “It saved my life,” she says. “I started off having to travel to Southampton for treatment. I couldn’t drive myself, and I don’t have family nearby, so a friend with young children had to take me there every week. I had to arrange childcare and so did she. It would take a whole day for the round trip, including waiting times, and we would never know what time we’d get back. It was so stressful.”

Now, on the outreach programme, Carla attends the local hospice and is able to walk (or run, she says) to her regular chemotherapy appointments. She can be in and out within an hour.

Initially the nurses who administered the drugs would arrive from Southampton by taxi. “The drugs they have to carry are so toxic that their own car insurance wouldn’t cover them, in case of accidents, so for about a year and a half they were using taxis to get to the Hospice.”

Clearly this was not ideal for the nurses – it was a long journey and relying on taxis was not always easy. So when cancer charity Hope for Tomorrow became involved and provided a Nurses’ Support Vehicle, the process became much more efficient for both nurses and patients. Carla attended the ceremony when the keys to the Hope for Tomorrow Support Vehicle were handed over, and she has only praise for the service they offer.

“The new vehicle changed the life of the nurses significantly,” she says. “They can now get back to Southampton as soon as they’ve finished at the Hospice, sometimes with a few hours spare to get back to work.”

After more than five years of regular cancer treatment at the Hospice, Carla is close friends with Head Oncology Nurse Debbie Summer, who has been a constant presence throughout. Carla recently nominated her for an award at Southampton General Hospital.

“Debbie won the Healthwatch Patient Experience Award after I nominated her,” says Carla. “She’s great – always on hand with a cup of tea, and she knows exactly what to say and do for me.”

Carla is now being treated at the Hospice for one hour every three weeks. She believes the treatment is working, and the side effects are “not too bad.” The Hospice has four treatment chairs, with two nurses able to treat up to ten patients per day.

“I’m so grateful to the NHS for my treatment, and for the outreach programme – which means I spend one hour locally on treatment instead of wasting a whole day,” Carla says. “And huge thanks to Hope for Tomorrow for providing the vehicle for the nurses. This service has a huge impact – not only on individual patients but on the rest of their families, friends and carers. It simplifies everything, it reduces stress and saves valuable time.

“It makes cancer small in my life.” 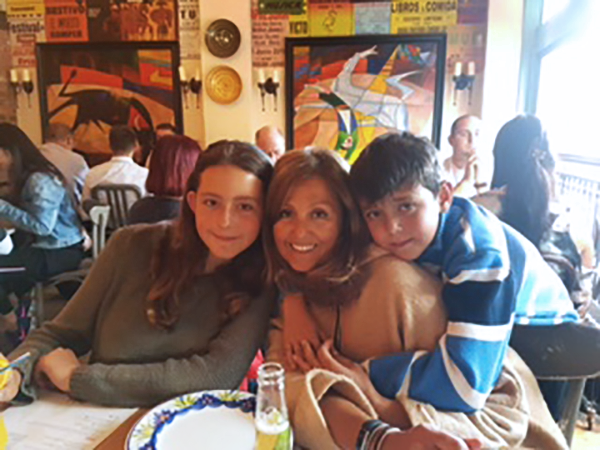