A proud day for us, marking our 10th year of mobile cancer care!

On the 20th February, we were celebrating the milestone of reaching 10 years since the launch of our first ever (and subsequently the world’s first ever) Mobile Chemotherapy Unit (MCU)!
Held at The Whittle Taps, Regent Street in Cheltenham, we were honoured to have so many guests attend and join us in the celebrations, including long term supporters, charity ambassadors, Gloucestershire medical team, press and The Duchess of Beaufort. 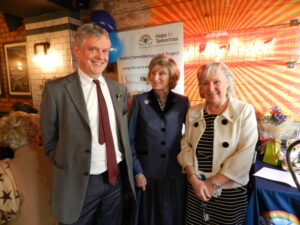 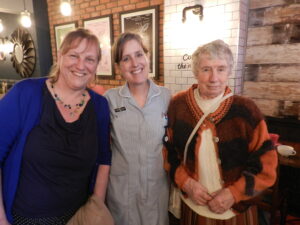 After a successful appeal, and to mark the 10th anniversary, we presented Gloucestershire NHS Foundations Trust with a brand new Generation Two, MCU; ‘Helen’, enabling us to continue to bring cancer care closer to patients’ homes. ‘Helen’ was a dear friend of our charity founder, who sadly passed away from cancer.

Since the launch in 2007, Helen has saved patients 54,000 hours of waiting time and over 720,000 miles.
Many donated towards this appeal by a tremendous amount of fundraising for which we are incredibly grateful. We would also like to take a moment to thank The Swire Charitable Trust who made a sizeable donation, which completed the appeal.

The official opening of the new MCU was by The Duchess of Beaufort who cut the ribbon for us, before guests were invited on board to have a tour. 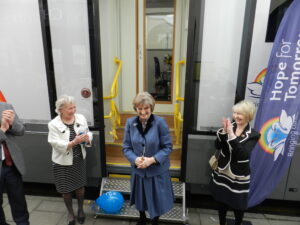 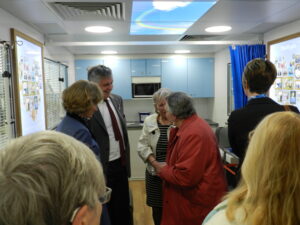 It was a moving day for all who attended as everybody had been involved at some point, on the Hope for Tomorrow journey, and we would like to take this opportunity to say a huge thank you to all involved. You have all been an important part in helping us move forward.

Sue Pobjoy was a patient on the Gloucestershire MCU and summed up the mood of the day by saying “It was fundamental to the success of my treatment and I’m still here. When I was diagnosed I was prepared for the worst – the hospital were really supportive and encouraged people to use it. It’s a fantastic facility.”
Pictured below – Sue Pobjoy giving her speech 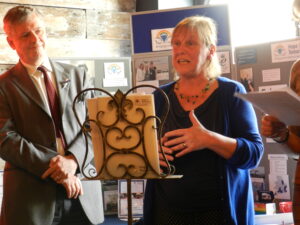 Our Founder, Christine Mills said “I am so proud of the journey that we have been on since 2007 and thrilled to be able to present the new Mobile Chemotherapy Unit to Gloucestershire NHS, which will be open to patients immediately! Myself and the team at Hope for Tomorrow are delighted that so many have received their treatment closer to home. It is incredibly moving to stand here today and hear first hand how the charity has benefited the patients. I want to take this opportunity to say thank you to everyone who has been involved up to this point, and here’s to the next ten years!”